For five decades, the Toronto Chamber Choir’s mission has been to present creative programs of Renaissance and Baroque repertoire, performed in a historically informed style and to a high musical standard. The choir also performs music from later periods that complements or illuminates our core repertoire.

The TCC is always looking for skilled singers with a special love of early music. Auditions are held throughout the year as necessary and include sight-reading tests in the areas of rhythm, pitch, and languages (Latin, French, German). If you are interested in becoming a member of the choir, please click here for more information on how to join. 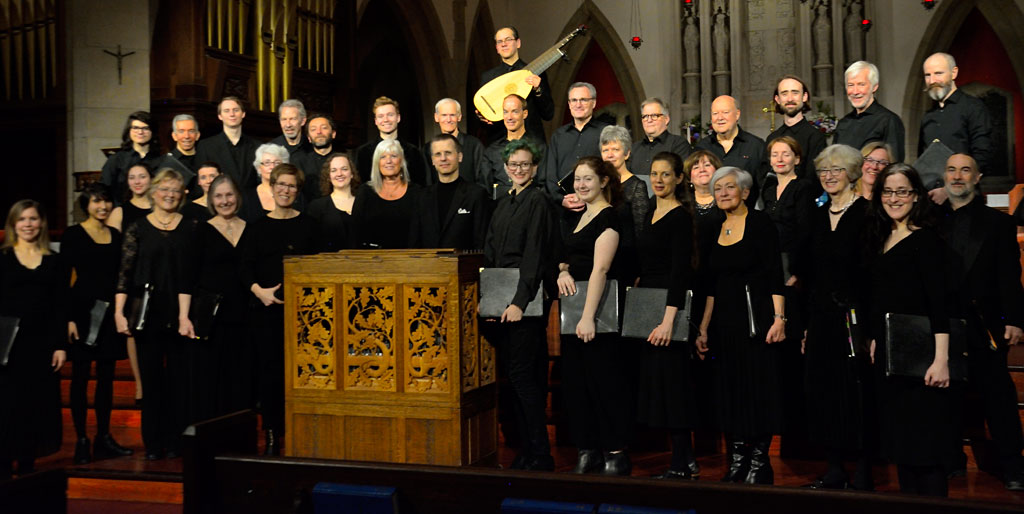 A member of the audience who had experienced recent personal loss and trauma said to one of our choristers after a concert: “You do not know what a gift you gave me this afternoon. The sound spoke to my soul and that is something that I thought I would never be able to feel again. I thought that it had been lost to me forever. I don’t know anyone here but you spoke to me earlier, and I want you and the others to know what this afternoon meant to me.”

History of the Choir

The Toronto Chamber choir was founded in 1968 by Annegret Wright, a young musician with a special passion for and understanding of German Baroque music. The choir had among its aims — as it still does today — to provide a means for people who love early music to listen to superior performances, learn more about it, and perhaps even participate in creating it.

Besides satisfying audiences keen to hear more music by J.S. Bach, Annegret also introduced Toronto to other Baroque composers, among them her favourites Schütz, Scheidt and Schein. The choir brought in soloists such as the famous mezzo-soprano Catherine Robbin and bass John Dodington. Thus our reputation for presenting informed performances of rarely heard works began. Annegret led the choir for ten years before deciding to pass the baton to a new director, although she remained active in its evolution until her death from cancer just before the choir celebrated its twentieth anniversary concert, which she was to have conducted.

The choir’s Kaffeemusik tradition was started by Director Lorna Lutz-Heyge, an expert in Baroque and Renaissance music who wanted to expand performances from two a year to four. These afternoon performances combined music with an engaging lecture as well as coffee and home-baked goodies.  The tradition of doing two of these Kaffeemusik performances per season continues even now, though the presentation style has taken an exciting new turn.  More recent Kaffeemusiks have focused on illuminating the music’s cultural context by combining music with narration and visual images.

David Fallis, Director from 1984 through to 2008, further shaped the choir’s expertise and, through his affiliation with Toronto Consort and Tafelmusik, provided increased opportunities for performances with other early music musicians. He also introduced additional historical techniques to the choir, such as ornamentation and Baroque pitch. During his long tenure the choir solidified its standing in the city’s early music community and performed many rare and challenging works.

After twenty-four years at the helm, David passed the baton to Mark Vuorinen. Under his leadership, the choir not only continued its excellence in early music but also presented a number of first performances and Canadian premieres of works by contemporary composers, including John Burge, Timothy Corlis, Robinson McLellan, and Tawnie Olsen.

In 2014 the choir was delighted to welcome Lucas Harris as its new Artistic Director. You can read his biography here.

Learn about our section lead program, the Toronto Chamber Consort.