I have had reinforced to me a lot about choral singing over the past few months. This may seem odd or counter-intuitive, but it is true. During this longest break from singing in a group since I was eleven years old, I have been doing what I can to fill the void or recreate the act of performing. I have taken part in a virtual choir by taping videos of myself singing the tenor line to a combination click track and the part played on a keyboard. I pick the least awful sounding version and send it along. I have recorded just an audio file (much less traumatic than video!) of hymns, unison or tenor and sent those along to become part of a virtual church choir. And in all cases, someone stitches my part together with those sent in by others and, generally, the result is adequate.

Here is the latest piece (Olivier Messiaen's O Sacrum Convivium) I've helped record for the Helios Ensemble, the choir my wife and I joined this year near our second home in Tucson, Arizona:

Now, don’t get me wrong. It takes a lot of work to put everything together, rather like assembling a piece of flat-pack furniture, or maybe a model kit: cut the pieces off the sprue, glue them together, paint, and add decals. I have also seen some actually wonderful performances that professional artists have melded together on Facebook. But, when I think back to my own experience of the creative act, performing my own part, there is a lot lacking for me.

At one level there is the awfulness of hearing my own voice, unvarnished and with every hesitation, wrong breath, slightly off the tuning or the tempo right there in front of me. I am sure many have seen a wonderful YouTube video made by a courageous amateur singer from the UK to the tune of “For All the Saints,” which laments all of this in an amusing way. But what has been truly highlighted for me is the “total immersion” experience of singing in a choir that cannot be recreated alone.

First off, my voice sounds so much better (to me, anyway) when blended in with the mellifluous voices of my fellow tenors. So much easier to get the vocal tuning solid when blending with other similar vocal sounds. Then add in the other parts and the way a chord sounds when all the parts have it right in the centre and the sound waves match and augment — heavenly. Or where there is a gorgeous choral “scrunch” as one vocal part rubs up against another (I’m thinking especially of Messrs. Monteverdi, Purcell, and Tallis).

Then, there is the business of timing. Not just starting to sing at the same time, or singing each word at the same time, but having each vowel be the same length, each consonant (especially an ending one) sound at the same time. That communal breath in and the “spidey senses” all working so that everyone is hyper aware of what everyone around is doing or about to do. And how exactly do you pronounce that word? And have we all sung louder or softer at the same time and to the same degree? If you have sung in the same choir for a while, and with the same people, you just feel the music together; laying down a track just doesn’t quite do it.

So, ignoring the obvious social aspects of missing my buddies (and making snide comments about the basses), I have had reinforced to me all the things I miss about performing with people. I will continue to record tracks and send them in because I still want to participate, and making any music is good right now. I encourage others to do it; with the right attitude it is a good experience. But when we all get together, it is clear that the result is greater than simply the sum of the parts. Bring on the total immersion! 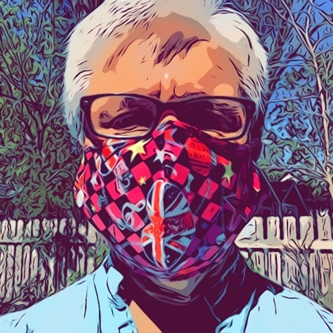 Michael Brett was born in the UK and has sung in choirs since he was a lad (now a distressingly long time ago) and in the TCC's tenor section for more than 30 years. Choral singing has given him elation, friendship, purpose — and a wife!